Malaysia’s exports grew 13.6% to RM88.9 billion in September from a year earlier, the largest year-on-year expansion in nearly two years, thanks to the country’s strong export performance in all major markets. 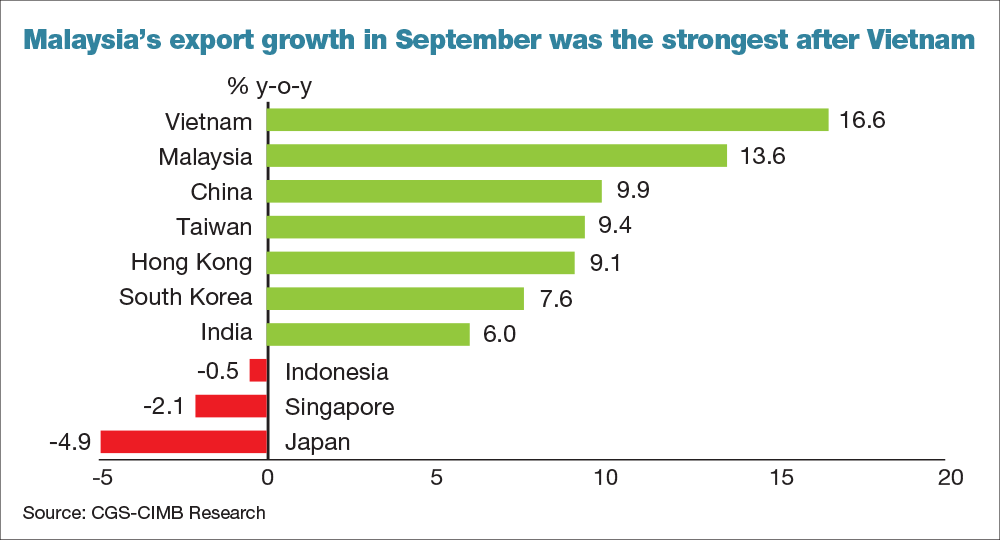 This is not only Malaysia’s highest export value ever recorded for the month of September, but also well above Bloomberg’s projection of a 2% growth.

In contrast, August saw a 2.9% contraction in exports from a year earlier.

Imports, on the other hand, saw their seventh consecutive decline in September but at a narrower margin of 3.6% from a year earlier, according to the Department of Statistics Malaysia.

This led to the country posting a trade surplus of RM22 billion in September, a growth of 149.3% from a year earlier. 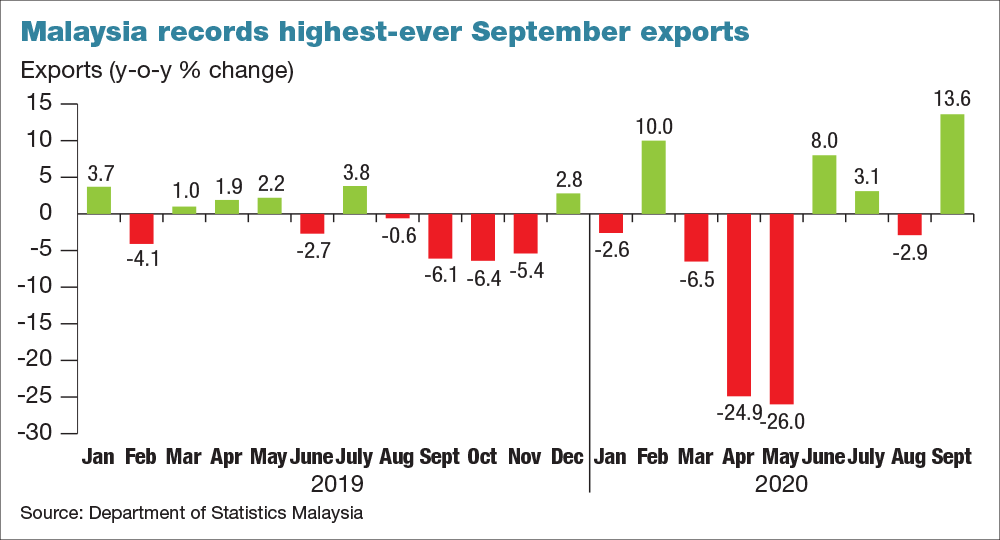 Meanwhile, economists are still retaining their projections that exports will remain at a contraction in 2020.

CGS-CIMB Research, for one, is maintaining its –2% gross exports forecast for the year.

Its economists Michelle Chia and Lim Yee Ping, in a note, commented the sharp improvement in exports in September was heavily concentrated in manufacturing (17.5% year-on-year) — primarily electrical and electronic (E&E), gloves and iron and steel, while palm oil also contributed to the surge in agriculture exports (26.6% year-on-year).

They added that the global surge in Covid-19 infections over the last month provides further support to exports of rubber products by 115.8% year-on-year, while palm oil exports rose by 43.6% as the production season reaches its peak, coinciding with restocking activities by China and the EU.

Additionally, the stockpiling by China ahead of the US ban on tech exports on Sept 15 has also likely boosted Malaysia’s E&E exports by 33% in September. “Although some cooling off is expected following the ban, we think key consumer electronics and smartphone launches will continue to support external demand for E&E, particularly semiconductors,” they said.

On prospects, UOB Malaysia economists Julia Goh and Loke Siew Ting are expecting export figures to remain bumpy amid the resurgence of Covid-19 infections across major developed countries, as well as in Malaysia.

The research firm has reaffirmed its 2020 full-year export projection of 3.5% contraction, partly aided by low year-ago base effects.

“We project exports to rise 4.0% in 2021, supported by projected recovery in global demand. Supply and availability of Covid-19 vaccines are generally expected to be ready by mid-2021,” said Goh and Loke in a report released yesterday.

Apart from that, they noted the outcome of the US presidential elections on Nov 3, passage of US fiscal stimulus package, and progress of vaccine trials over the coming months, are key drivers of global trade and investment in 2021.

Given the nature of commodity fluctuations, palm oil prices may retract, leading to potential lower export growth down the line, he added.